Adventure Spec's Dave Lomax was one of the very first to get his hands on the new Honda CRF 450L at the press launch in Wales this October. He went with a single brief, to get an early view on whether or not the CRF 250L's big brother had the potential to be a Trans Euro Trail bike contender.

For a market starved of lightweight trail bike choice for a long time I am delighted that something is changing. The CRF450L is a strong move in the right direction and although it isn’t perfect for me out of the box it has some major steps forward that make it unique and some stuff that I just liked.

I loved the wide ratio gearbox, the easy power delivery, the plush suspension, the rear subframe, the whisper quiet ride, the awesome clocks (with loads of fuel information), the keyed ignition.

I liked the (potentially) decent lights and the slightly more sensible seat height than a standard enduro bike..

The jury is out on low speed fuelling during technical riding, service intervals and seat comfort. I’d need more time with the bike to comment more on these items. I also wasn’t too impressed with the stock tyres for anything other than hardpack use. If you’re heading to softer ground a change is recommended.

Finally, comes the elephant in the room, the one issue I have deliberately steered clear of. Price. I was invited to go and ride the bike and I did. I am reporting back as honestly as I can and I have no vested interest at all in Honda selling 1 or 1000 of these bikes.

I know there are people out there who happily spend £15,000 on a bike project to take on a rally or a trail ride for a few weeks, and I also know that there are many people who would never do that. I can’t decide whether this bike is worth the (not inconsiderable) asking price of £9500.00 to any specific rider. That’s for you to choose.

So, if money was no object would I have one?

The Honda is very much my style of ride and overall I give it a big thumbs up... but, that service interval... if I had to change the oil every 1000km I wouldn’t take it. But, on the advice I’ve had I’d take one and change fully synthetic oil every 3000km.

I’ve got all the juicy internal engine mod details if anyone wants them, but I’m guessing in reality all you’ll want to know is this. The engine is a fully road legal EURO4 spec unit (unlike the US version) and produces 18.4kW (just under 25bhp) with peak torque of 32Nm (24ft-lb).

All that torque and power are available under 6000rpm making for an easy/lazy ride at lower revs. And, no it doesn’t feel anything like the breathless CRF250l (at a similar 17kw/22.8hp). The 450CRF’s extra torque allowed it to make great progress along roads at over 70mph and it had more than enough power off-road on all open and technical sections (as almost all bikes have!). If you want to set the world on fire this bike probably isn’t for you. But, for back-to-back 250km off-road days ridden by an average trail rider I think the soft power delivery would help that back tyre find extra grip despite tired hands and reduce the overall body fatigue associated with the the usual hammering you get from a 200+km day on a 60bhp 105kg 450cc Enduro bike.

The major service interval for the bike is set at 19000 miles and until that point there is little to do. Replace fuel filters every 3000km, brake fluid every 6000km. That’s it…oh, except replace 1.4l of oil (the engine and gearbox oil are now combined) every 1000km?! Perfectly normal for an enduro bike, but not what adventure riders had been hoping for. I spoke to the Honda engineer who designed the engine personally and asked him the spec of the oil (Semi Synthetic) and if he thought the service interval could be extended if I used fully synthetic oil. After some persuasion he suggested that a 2000km service interval would probably be fine. This issue is definitely up for debate and having spoken to other very experienced riders and engineers including Lyndon Poskitt, I now know that if I had a CRF I’d be extending that interval to 3000km.

A true wide-ratio 6 speed gearbox on an enduro style bike? Yes please! No swapping out sprockets here or carrying a spare front 14T in case of any ‘long runs’. This bad boy will allow you to happily blip over technical stuff at 3mph whilst also allowing you to cruise at 70mph in perfect comfort. That 6th gear is Taaaaaaall. We like this...a LOT! In addition to the wide ratio gearbox there is a rear rubber-damped sprocket and chain guide, which somehow conspire to produce an almost silent running drive chain with zero snatching. Although there is no cush drive (despite what other media outlets tell us) I specifically asked the Honda engineers about this issue and they told me that they had no fears for the gearbox output shaft bearing...at 24hp perhaps not a huge surprise. Finally, the engine connects to the rider through a cable operated 7-disc clutch more used to dealing with 60hp than 25hp...so no burnouts likely, even in soft sand. The cable clutch would obviously need to be doubled up for remoter trips and of course it can start to feel heavy after extended technical sections compared to a hydraulic version, but in less technical riding it wasn’t noticeable. So, why the cable clutch? Hondas race experience in long distance US Hare Scrambles told them that they needed the ability for riders to adjust the clutch on the fly...take one look at the cable adjuster on this bike and you’ll see this is still the case today.

The CRF runs a 49mm Showa steel-sprung USD fork (adjustable for preload plus compression damping) and is matched by a fully adjustable Showa rear shock, operated through a Honda Pro-Link. Brakes are a 260mm two-piston brake caliper at the front and a 240mm wave-pattern disc and single-piston caliper is at the rear.

What does all this mean? Luxury! This is a really plush setup softened from the CRF450r especially for the road legal version. It performed beautifully as I deliberately forced it to brake hard through corner apexes, pushed it into wet bomb holes and cross rutted it over across deep slimy ruts. To me (at the speeds I ride) this setup felt as good as the closed cartridge forks on the new 2018 Husqvarna bikes I was riding the week before at the Adventure Rider Centre in Spain. There is absolutely no compromise here, just superb suspension. Perhaps not perfect at race speeds, but as a trail rider looking for forgiveness at lower speeds, I loved it.

I travelled only 70km by the end of my test day and checked my fuel consumption twice. Fast A-road riding (60-70mph) gave me 17.7km/l (50mpg) and very slow technical riding left me with 14.6km/l (41.5mpg). I have little doubt that extended 60mph cruising would see at least 20km/l. Oddly, these numbers match almost exactly those of my old DRZ400e...

This tells us that the battery is NOT going to like very cold weather and unless it’s daylight (no headlight) and very cold (no fan) there will be no 90 spare watts of heated jacket capacity. However, there is more than enough spare power to charge a phone and keep a GPS running. I was unable to test the lights in dark conditions to see how effective the headlight unit was, but the multiple LED lens unit looked potentially more than enough to make the idea of extra lights redundant.

A super slim back end (KTM style) is nicely supported by an aluminium square section triangle right out to the rear of the bike with four mounting points for a rear rack located on the underside of the rear fender (very exposed to dirt…). Perfect for a Giant Loop Mojave or Coyote bag with a roll bag on top whilst still leaving plenty of space on that after market rear rack for day to day extras, should you choose to fit one.

HOW DOES IT DROP AND LIFT?

Continuing to force the bike to do what wasn’t sensible (in the name of suspension testing, obviously) was guaranteed to end only one way and eventually I went down cross-rutted in a soggy leafy dip. By this time I was tired and out of breath having just completed about 20 laps of a slippy, riverbed-centred loop, and this was exactly what I wanted! Ideally I’d have had luggage on the bike too, but as this wasn’t possible I lifted without and to be honest for a 130kg bike I found it surprisingly easy. Weight seems to be kept low and there were no problems finding things to grab.

Once lifted one mirror rotated forlornly and needed a spanner to reset, a set of DoubleTake mirrors needed there then. Other than that the bike was unscathed and started perfectly first stab of the button despite being slightly under horizontal for a good 45 seconds. Overall a good result, but I still think we were lucky. There are no handguards fitted on this bike as standard, which means every drop is potential broken lever. For me, a set of aftermarket Cycra Handguards would be an essential addition.

HOW DOES IT RIDE?

The bike rode well. Really well. An extra 18mm length on the swingarm reduces the tendency of the front to lift on the road and gave a nicely stable planted feel through tarmac bends, great if you have luggage on the back!). At speeds in excess of 70mph there was non of the scary high speed weave you often associate with asphalt dirt bike riding.

Offroad it was very comforting and neutral. No fear of being spat off by a tired throttle hand, progressive brakes and a really slim chassis gave a very natural riding position. If there was one thing I wasn’t too sure about it was the low speed fuelling. I found that at times it stalled and that the bike didn’t seem to ‘lug’ at low revs quite as well as I’d expected it to, but that may have been my 2-stroke throttle style, only more riding time would tell. What I can say is that better riders than me at the launch seemed to adapt quickly to the issue.

I think the best way I could describe the bike would be to say that it felt like a sophisticated, well mannered dirt bike with non of the loud and bad habits associated with the usual 450 dirt monsters that I am familiar with. Stealth silent, comfortable and easy to ride I’d certainly be up for taking a CRF450l on a longer ride into some more remote terrain. 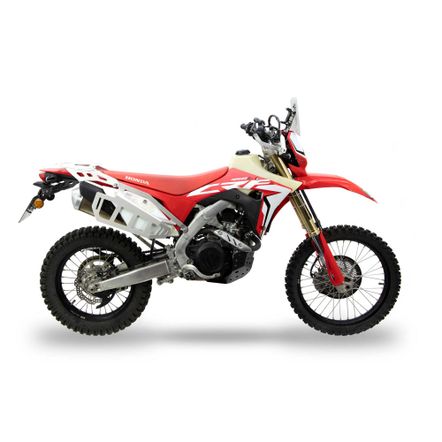