In the mid 2000’s, on a rocky hill in the middle of North Yorkshire, two guys pulled up next to each other on their battered old trail bikes. They may not have realised it at the time, but this first chance encounter between Chris Colling and Dave Lomax was the start of a partnership that would see a shift in adventure motorcycling, from the DIY, make your own riding gear days of old to the development and production of considered adventure riding gear designed specifically to help motorcyclists travel into more remote, challenging and rewarding environments around the world.

Chris and Dave had spent decades honing their experiences of riding small, lightweight motorcycles into wild environments where self reliance and courage are rewarded with an unfiltered view of the world. Beyond the all too scary news headlines they often discovered people, communities and stories of warmth and generosity that come from allowing yourself to be vulnerable and open to chance. Their trail bikes and knowledge of alpine camping had allowed them to travel beyond the tourist gaze and by travelling light they were able to go further and be more in tune with the regions they traversed. They were guided by the core principle that ‘light is right’. 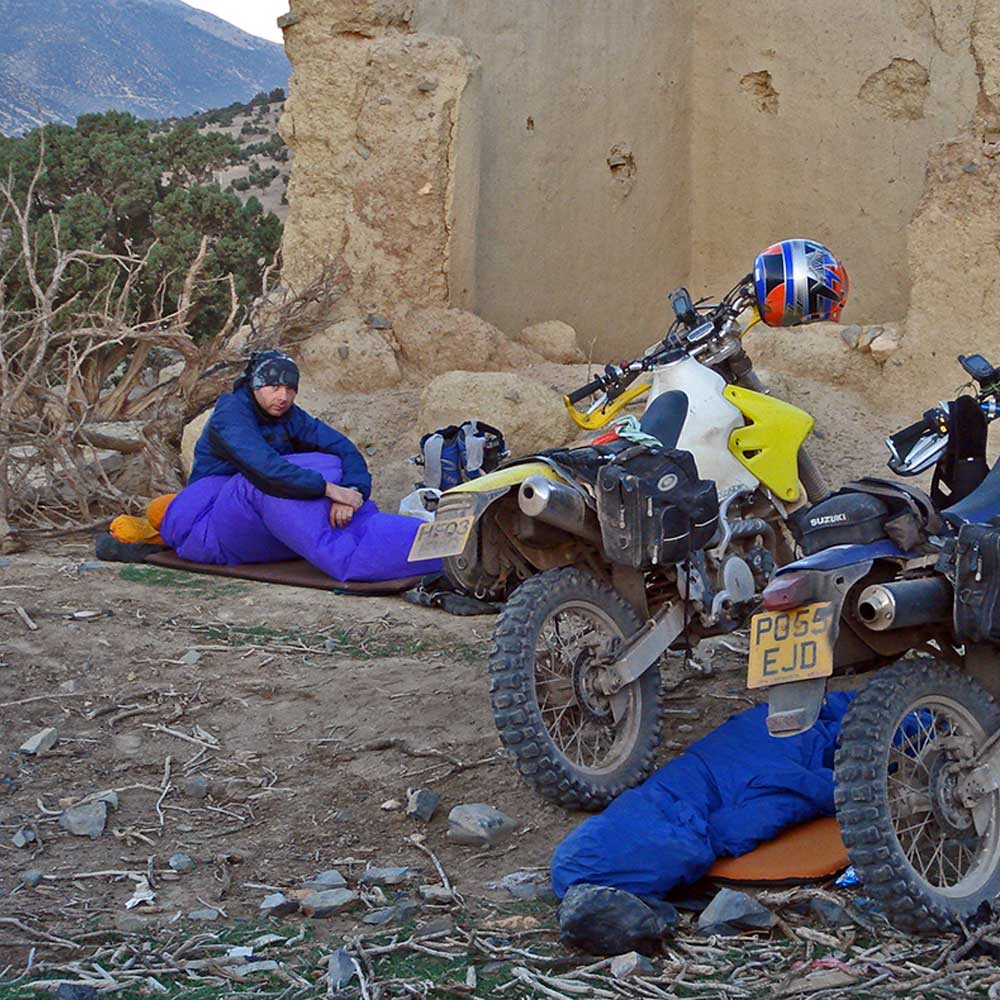 Dave camping light in Morocco in 2006 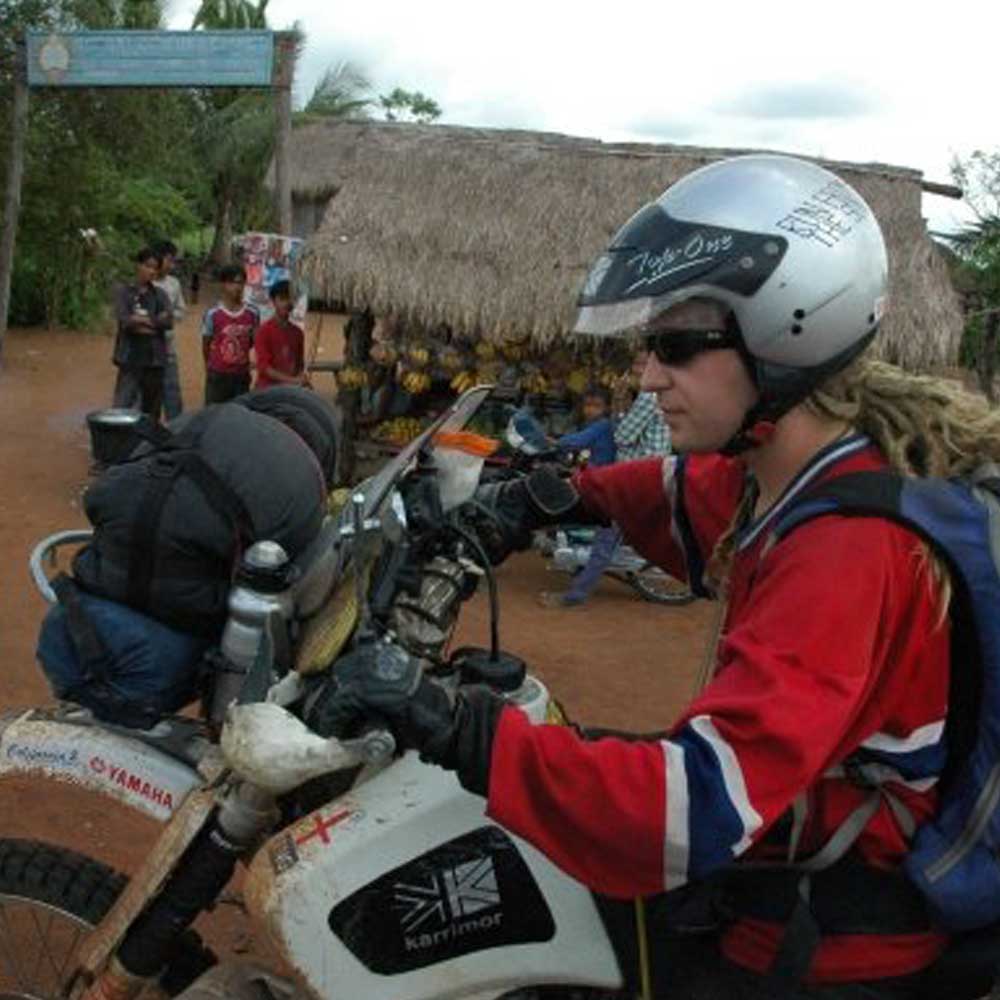 Back in Yorkshire, some months after that fateful first meeting on Rudland Rigg, Chris and Dave created Adventure Spec. The founding principle was simple, to supply adventure motorcyclists with gear that was truly ‘adventure spec’. At a time when the adventure riding community was poorly served with bulky gear orientated to the road rider, Adventure Spec began stocking lightweight gear built on the principle of reducing weight whilst considering the efforts required to ride and exist off road. 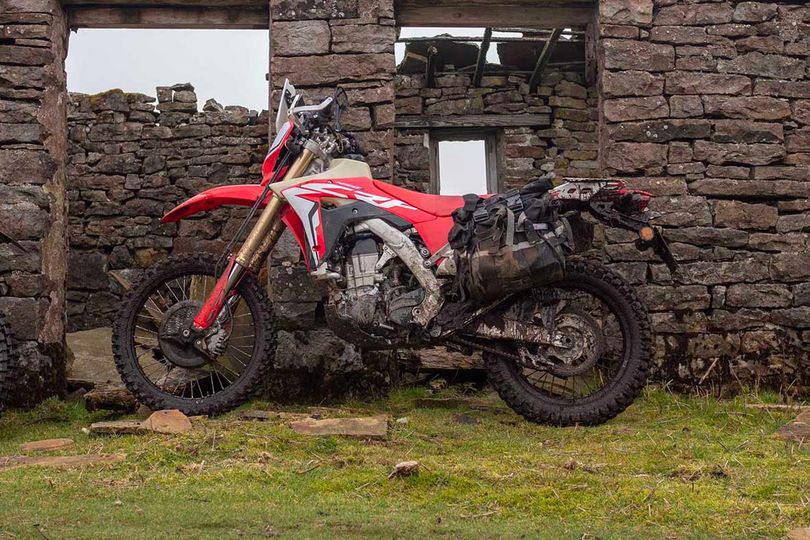 Partnering with leading adventure motorcyclist Walter Colebatch, Adventure Spec developed the Magadan Panniers, a simple, tough, waterproof luggage system that would be easy to repair with local tools and knowledge anywhere in the world. As USA manufacturer Klim came on board, Adventure Spec contributed to the development of cutting edge rally clothing that could withstand the extreme demands of the professional adventure motorcycling athlete as tested by Lyndon Poskitt in multiple Dakar Rallies. Motorcycle manufacturers began to produce a wider range of adventure machines and Adventure Spec applied their expertise to the aftermarket protective parts that would help these bikes survive beyond the showroom floor.

Adventure Spec became synonymous with quality and expertise, their customers and community relying on them to help understand as much about what is required to travel further afield off road, to what gear you simply don’t need to take on an overland trip. However, as the popularity of trail and adventure riding began to take off, Chris and Dave realised that some of the principles that had guided them in the early days of adventure motorcycling had begun to be forgotten.

Huge adventure bikes were becoming the norm, the idea of being able to take masses of luggage in hard panniers was being promoted by bike manufacturers. Clothing was beginning to become overly technical, materials and techniques were being used that were fine when riding but fell short when off the bike. The essence of ‘light is right’ was being lost. 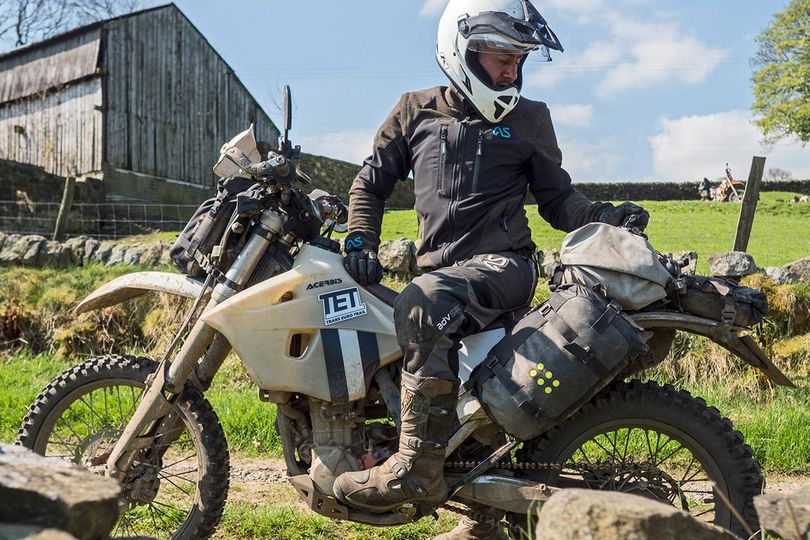 In 2015 Chris and Dave began working on ADV Spec, a range of clothing that was specifically designed to meet the demands of the lightweight adventure motorcyclist. The gear would be simple, a nod to the days when adventure riders didn’t look like they were wearing space suits. It would be built around the alpine layering philosophy so common and well regarded in the outdoor mountaineering community. The clothing would sit somewhere between motorcycle and outdoor hiking gear with layers that could be added or removed depending on the conditions encountered. Styling would be simple, helping riders blend more easily with the locals that they would encounter on their travels. It would be easy to maintain and repair in the field. Whilst the gear could be worn by anyone riding anything, it would work best on small to mid sized trail bikes that place weight, manoeuvrability and ease of maintenance over speed or power.

Whilst Chris, Dave and the team were busy designing, prototyping and testing the new ADV Spec gear, another adventure motorcyclist was preparing his own project. Inspired by the Trans America Trail – the 4,000 mile off road route through America, John Ross, a keen trail rider also based in Yorkshire was attempting to do what many had thought impossible, create a continuous dirt road route through Europe, tens of thousands of kilometers long. Backed by a small group of volunteers, John approached Chris and Dave with an idea… “would Adventure Spec be interested in helping bring The Trans Euro Trail to life?”. 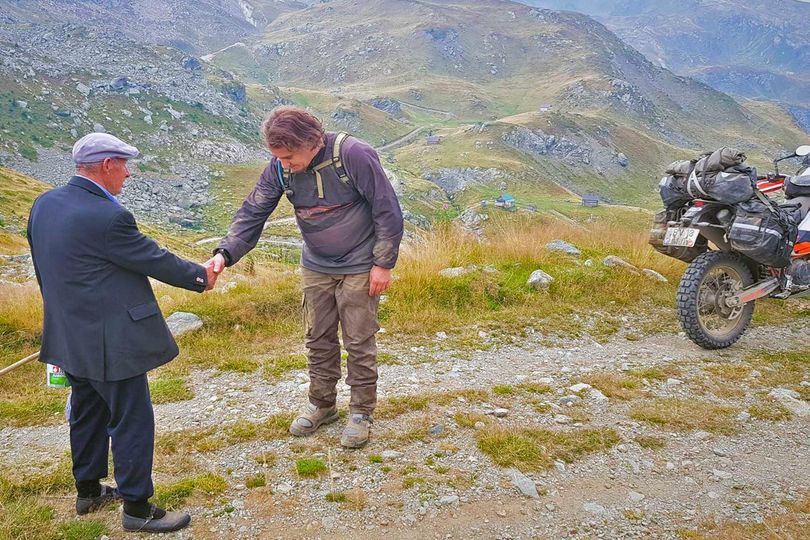 2017 was a pivotal year in the Adventure Spec story. The ADV Spec clothing range that had been in production for several years, the principle of which had been one of the foundations of Chris and Dave’s adventure riding, finally launched. Comprising of base, mid and outer layers, the range was spearheaded by The Linesman Jacket, an adventure jacket unlike anything seen in the market before. Its name was a celebration of the ‘Linesmen’, the volunteers who helped piece together the 40,000km route that is The Trans Euro Trail (TET).

John Ross’ vision had become a reality. It hadn’t taken much convincing for Chris and Dave to realise that the aims and values of the TET were absolutely aligned with Adventure Spec. A project to unlock the dirt roads of Europe and create a means of using small and mid-sized adventure bikes to explore the varied landscapes and connect with the communities of Europe.

John and Adventure Spec worked together to take the TET from an idea and grow it into not just a website and Facebook community, but also a Community Interest Company whose mission is to bring real tangible value to the regions and people that the TET route passes through. The project launched in 2017 and quickly became the ‘bucket list’ ride of adventure motorcyclists the world over.

The popularity of the Trans Euro Trail quickly demonstrated the hunger within Europe for opportunities to ride off road. Within the first year riders from as far afield as Australia had downloaded the route and set off in search of adventure. As the project found its feet riders attempted the journey on a range of bikes, from large BMW GS’s to small single cylinder machines. Themes began to emerge in the stories told, the challenge that big bikes brought, especially to those choosing to ride solo. Slowly the idea of smaller, lighter travel began to gain traction with more riders choosing 250, 400, 600cc bikes with minimal camping gear.

At the same time, questions began to be asked about the impact that a project like the TET could have on the trails that make up the 40,000km route. Could it withstand the increased traffic? How would the communities react? Would riders stick to the route? The TET team listened and began to tweak the project, promoting the values and behaviour of responsible trail riding, the benefits of spending cash in local, rural communities and the fact that the very future of the TET depends on the riders who choose to take part in it. 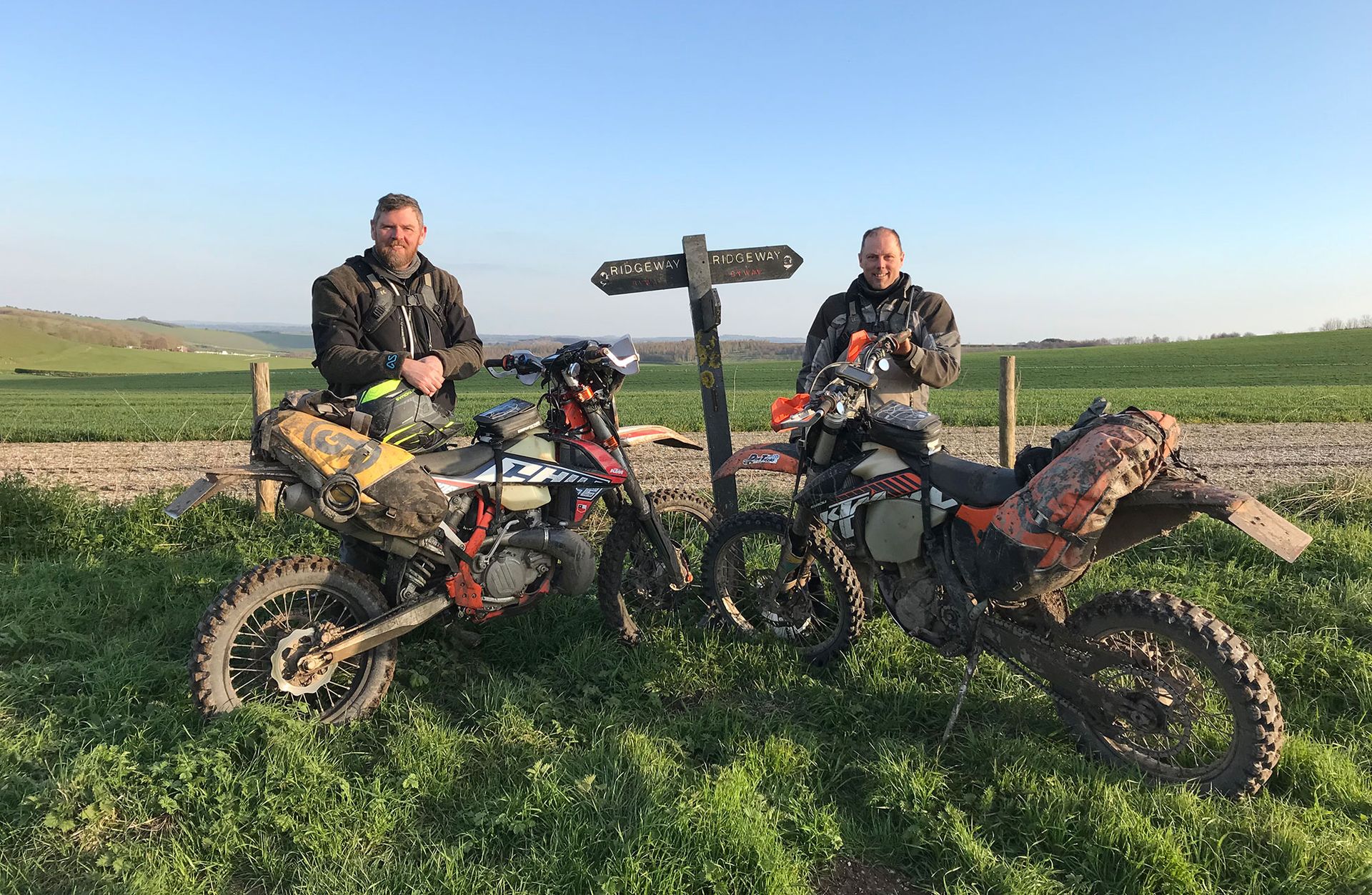 For Chris and Dave, the journey that they had started back on a Yorkshire hillside almost twenty years ago has evolved. The meaning behind the mantra ‘light is right’ has grown. Whereas once it was a statement applied to the philosophy of motorcycle gear, it is now as important as ever to also use it to describe our whole approach to adventure motorcycling.

Now more than ever we have the ability to travel further afield on machines that could quite literally take us around the world. The experiences and memories we return with are a privilege. As a community, we have a power that must be used with care. All travellers make an impact on the landscape and people they encounter, adventure motorcyclists must make a decision on whether this impact is one for good.

# stories
What is ADV Layering?
Our guide to getting the best out of your Adventure Spec clothing.