Type 'KTM 500 Adventure Bike' into Google and right up there at the top of the results you will find 'The Rolling Hobo'.

Hi Jussi. Or is it Mr Rolling Hobo? Where did the name come from?

Most people call me Jussi, which is essentially John in my native Finnish, and my friends call me something much worse. Naming the site, and inadvertently my off-road alter ego, The Rolling Hobo, seemed fitting during its inception in 2013. I’d always loved to travel and furthermore was splitting my professional life between Helsinki and Berlin. So the lifestyle seemed pretty nomadic, and The Rolling Hobo took the win somewhat organically.

The final step to a fully fledged Hobo became a reality, as I sold my business in 2014 and took a step back from work to figure out the next chapter. Fittingly it happened on the verge of riding out to the great Eastern Dirt 14 expedition, which took our team of two across Russia and Mongolia, covering 22.000 km over seven weeks on two KTM 690’s.

Your philosophy to adventure riding seems to be very in line with ours. Light Is Right. Has it always been this way for you?

From an off-road performance perspective, all bikes are at their best when unloaded. The detriment to performance is proportional to how much cargo mass is added on the bike.

So a cargo of 30 kg does more damage to the riding characteristics of a 146 kg KTM 690 Enduro, compared to a 217 kg KTM 1290 Adventure R. Although I’ve never had a multi cylinder adventure bike, I did switch down from a 690 in 2016 and currently ride a 112 kg 2016 KTM 500 EXC. Experience has taught me that a 30 kg load on the 500 EXC would essentially defeat the purpose of riding such a light bike. In addition to other arguments for going light, the switch to the 500 EXC was without a doubt the greatest influencer to completely rethinking my gear configuration.

My greatest passions before all the two wheeled business were alpinism and cave diving. In terms of equipment, they both require mission specific alterations to the configuration, and carrying only what is necessary to safely execute the plan. So I suppose the gear oriented nature of the two above mentioned disciplines have shaped the way I approach equipment for anything I do. I tend to be quite meticulous, be it a long enduro expedition or a weekend mountain biking trip.

Having said that, experience plays significantly into the equation. My off-road expeditions only began in 2013, and since then my gear list has slimmed down from around 40 kg to under 7 kg for long expeditions. I feel it’s important to keep a document of the gear configuration and to revise it after each expedition. Even after all the iterations, there always seems to be something which can be taken off the list.

You seem to take the idea of travelling right to the extreme. You’ve even taking to cutting the legs off your waterproof trousers! Is there a point at which light is too light? Surely comfort must come into it at some point?

To be honest, I quite enjoy the spartan lifestyle of expeditions. However, comfort is important for physical and mental recovery after big days, and I have noticed a decline in the amount of camping days during the latest expeditions. However, it has also been due to the expeditions being located in very warm areas; being from the north, I find camping in very hot climate almost unbearable.

There is a line when things get too light, which is when people get hurt. Being able to keep the bike operational and moving, having adequate shelter, clothing, first aid supplies and enough food and water can prevent a disaster when things go wrong.

By the way there’s a solid logic behind the waterproof shorts so don’t mock them! They will certainly remain in my gear configuration for expeditions in hot climate. And you never know, maybe one day Adventure Spec will pick up on the idea and design a slick professional version of the Hobo Ghetto Rain Shorts. They would complement the grey Atacama Race Shell perfectly in a darker shade of grey, just saying.

I'll book in a meeting with our product development team! Your trips take you quite far from the beaten track. The idea of exploration and discovery must be a motivator for you. I’m guessing you wouldn’t be satisfied just following a Trans Euro Trail GPX?

The chaos and uncertainty of adventure enduro are thrilling, as the outcome is veiled until the end. The ultimate reward is being able to ride a section of dubious terrain, spotted on a satellite image months earlier, and eventually connecting it with another section and then another section etc. I suppose the uncertainty of the future and the lonely remoteness of the terrain are just a welcome contrast to the daily grind at work.

The TET is a great project and hats off to John Ross and Adventure Spec for bringing it into fruition. I’ve in fact contributed to it in the Finnish and Balkans’ sections, and rode a few sections of it in Turkey, Finland and Estonia this summer during the Prometheus 19 expedition. Time permitting, I would like to ride the whole TET, just to see the variety of terrain and trails other riders have linked. There is also still a lot of room for the TET to expand, as Russia and Ukraine hold an abundance of legally rideable trail, not to mention Turkey, the Caucasus region and beyond. Hopefully the TET will one day evolve into a Trans Eurasian Trail.

It looks like your approach to trail riding is starting to gain momentum within projects like the TET. Where do you think the sector is going?

It’s a natural evolution of the discipline, I guess.

Projects like the TET have enabled people to safely get a taste of off-road travel and want to try harder things, which means going lighter. Don’t get me wrong, I like pretty much anything on two wheels and don’t mean to belittle anyone’s passion, but there are just some trails and terrain which are not accessible to heavy bikes. Once things get steep and technical, the only feasible way to get ahead on the trail is a light bike with minimal luggage.

The light trail riding crowd will probably continue to grow, with new trails being discovered and equipment developed. However, I doubt it will ever reach the level of the current popularity of big adventure bikes or the Harleys a decade or two ago. It will likely, and hopefully, remain a niche discipline of committed masochistic individuals.

Emissions and environmental regulations will probably throttle off-road riding in Europe, but the emergence of electric bikes will hopefully open new opportunities. And as mentioned above, we only need to look to the east for endless off-road terrain.

We’ve been a big fan of your KTM ECX500 build and your website for a while now. It’s interesting seeing how a bike build can evolve over time. You document everything beautifully, as well as your expeditions. How much is design and photography a part of adventure riding for you?

I worked as a photographer in advertising for fifteen years, and The Rolling Hobo became a creative outlet; the dark and sinister visual world of the Hobo was a much needed antidote to the glossy imitation of life advertising portrays. I’ve since moved on from advertising and photography, but one never truly just stops being a photographer. So the camera is something that I’d like to ditch off the gear list, but I know I’d regret it terribly later. However, I do not plan anything according to narrative, photography or content. I have no compulsive need to document everything for publication. What happens, happens and maybe there will be a photo of it, or maybe not. The good thing is that the long duration of expeditions enables cherry picking the best opportunities in terms of location and lighting.

Design is very important. I don’t just mean visual things such as graphics kits or riding gear, but also the components of bike builds. Everything should be well designed and up to taking the punishment of expeditions. Backtracking to riding gear though; I’m happy to see Adventure Spec has refrained from producing all black riding gear, which is a nightmare for photographers. They understated grey gear is unique and looks good.

You’ve gone from a KTM 690 to a 500EXC. Many people would question just how capable an enduro bike is for long distance riding. Putting comfort aside, how do you approach the servicing and maintenance of riding a bike like this into remote areas?

Aaron Steinmann pretty much killed any doubts on the usability of the KTM 500 EXC during long expeditions. His 2015 KTM 500 EXC has over 100 000 km on the odometer with a bottom and two top end rebuilds. My 2016 KTM 500 EXC on the other hand currently has 27 153 km on the odometer with 455,5 hours on the clock. The bike has had no significant issues, let alone anything that interrupted a ride. I have full confidence in continuing to run expeditions with the 500, after first doing its first top end rebuild.

The service approach for the 500 EXC is exactly the same as on the 690; I carry critical items according to local availability and service the bike according to use. I typically service the bike every 25 to 35 hours of operation, depending on operational load. A typical half hour service break includes an engine oil change, air filter change and an oil filter change with every second oil change.

Air and oil filters can be hard to come by, so I usually carry enough spares to be covered in case I cannot source them locally. I don’t usually carry engine oil as it can usually be sourced easily from large towns and cities; any major brand four stroke motorcycle engine oil will do as long as it’s suitable for a wet clutch and has more or less the correct viscosity range.

Any type of service is best done in a workshop, and it’s a wonderful opportunity to meet locals. I usually stop at a random automotive workshop, and ask whether they’d let me work on the bike in their garage for half an hour. Thus far all technicians have agreed without hesitation, and have never asked for money but flatly refused it when I’ve offered. The auto workshops’ waste oil drum makes life much easier. I don’t see much sense in oil changes in the wild, unless it’s unavoidable due to drowning the engine or something. Either way the oil change will be messy due to the lack of a drain pan, and needing to bottle the waste oil to bring it back to civilisation for discarding.

Finally, does the Light Is Right philosophy affect your approach to everyday life? We’ve got visions of you living in a clean white minimal apartment with all your worldly possessions neatly folded into a medium sized suitcase…

You’re spot on. Except for the suitcase; everything fits in hand luggage.

A super lightweight (460g) waterproof breathable jacket designed to be worn over armour during rally stages. Comes with a removable, waterproof, neck brace compatible collar to aid venting. Unobtrusive when packed into its own chest pocket. 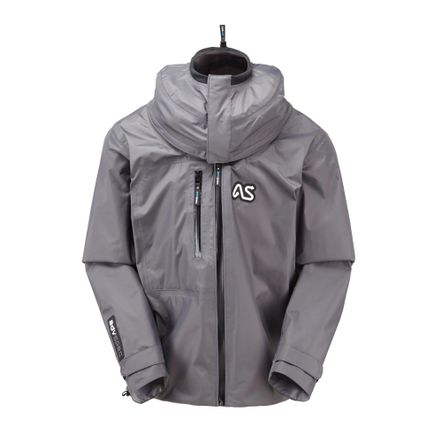