The TET: Clothing
Greg Villalobos gives the low down on his Adventure Spec clothing during his Trans Euro Trail adventure

Greg Villalobos was part of the team who helped to bring the Trans Euro Trail from idea to reality. So, having spent a LOT of hours behind a computer screen working on the TET he was super excited to finally get out and ride it!

Watch the film of his adventure through northern Europe and then find out more about the Adventure Spec gear that he and his firends used. 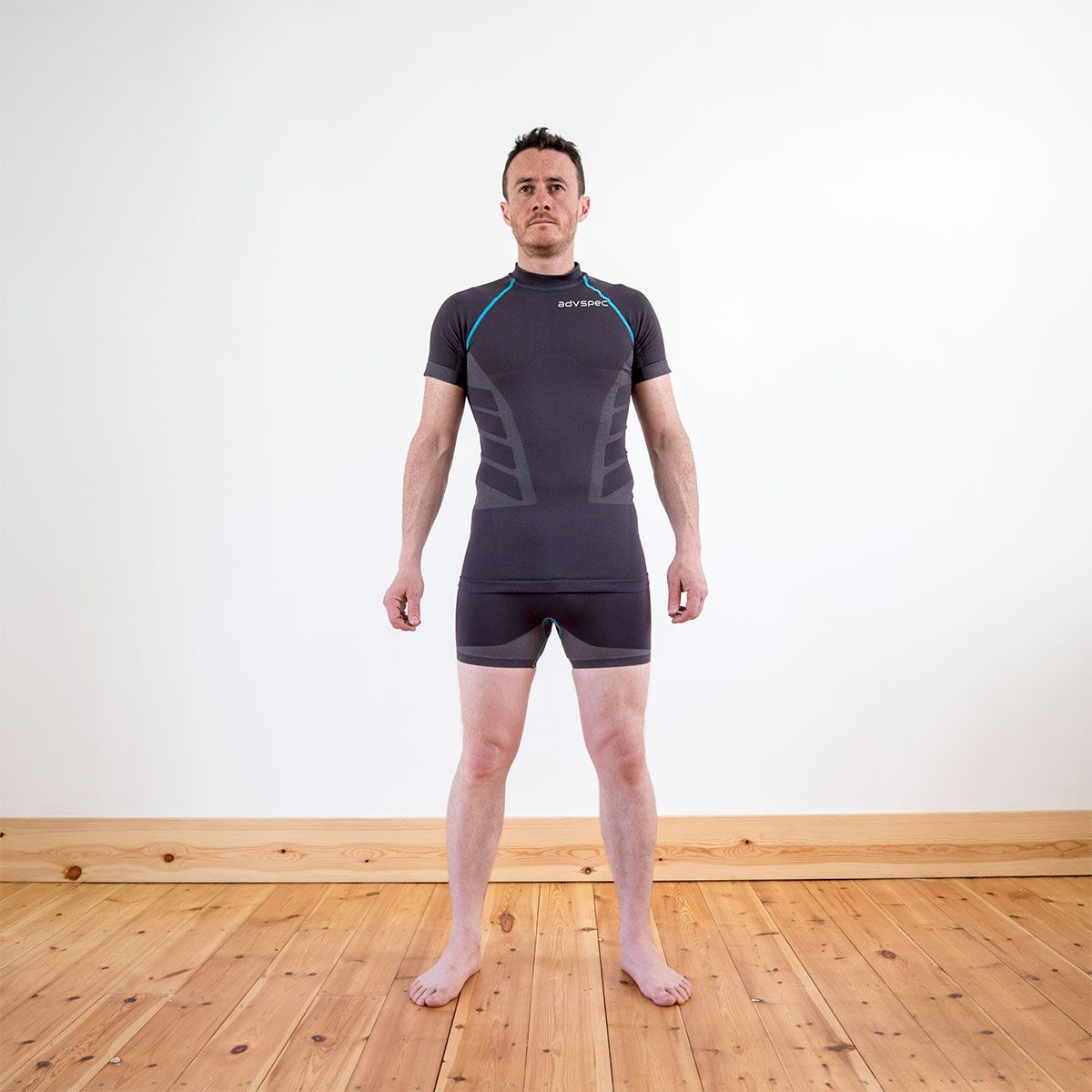 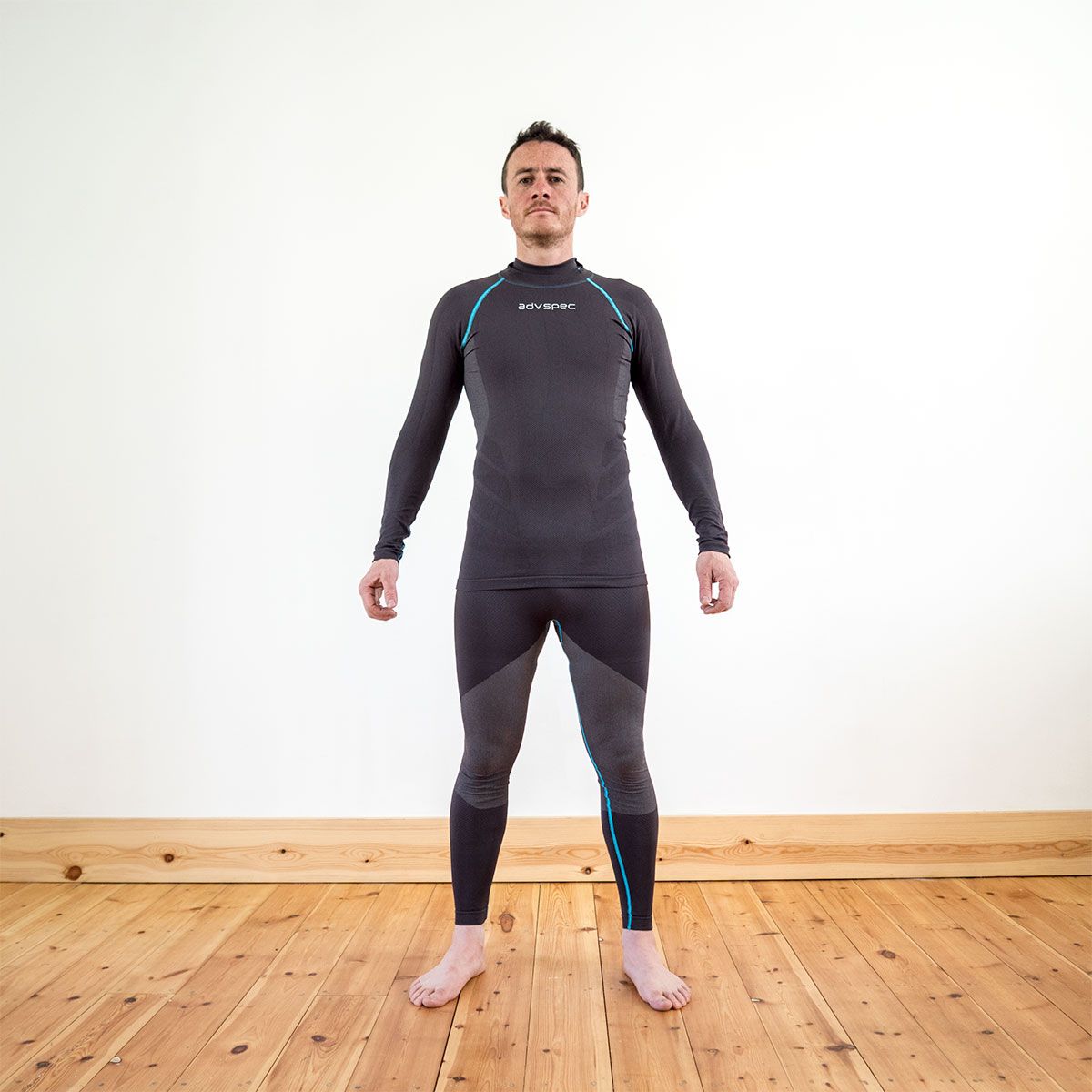 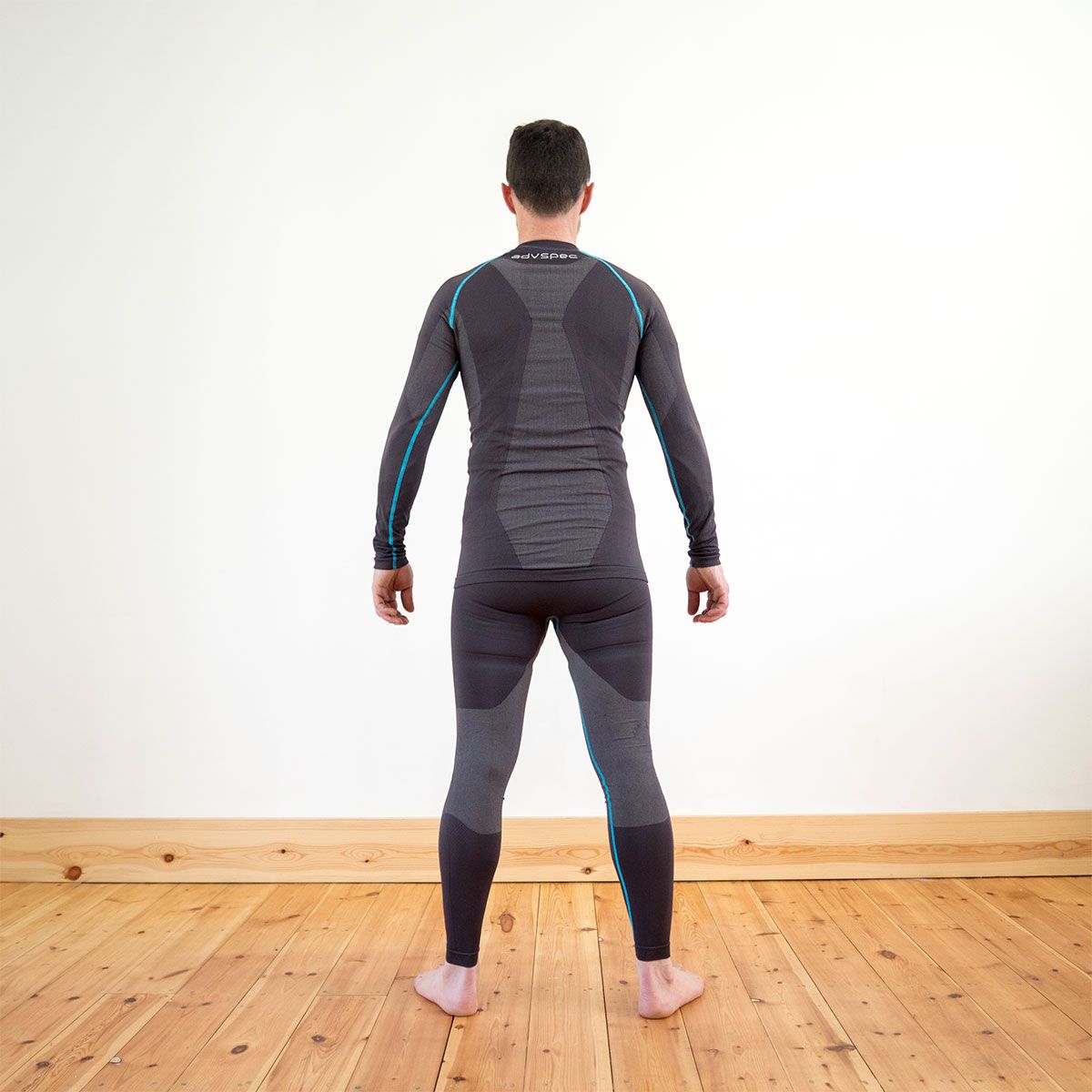 Adventure Spec have done a lot of development work on their base layers and the design team have always been quite animated when talking about this part of the new clothing range. Personally I didn’t quite get it, it’s a base layer - what’s to get excited about? This TET trip was the first time I used them and honestly they were a revelation.

The idea of a layering system is that you adapt your clothing to the environment you are riding through, or camping etc. You need a good base to start this system off with. For the TET trip I took the ADV Spec Core Shorts, Long Leg, Short Sleeve and Long Sleeve.

Unlike other base layers I’ve used, the ADV Spec system is light and non-fleeced. That allows it to be used in both hot and cold environments. At the start of the trip in the Netherlands, it was about pretty chilly and wet and I used the long versions of the gear which did their job well. When the temperature rose as we got back in to the UK I shifted to the short versions.

There are two things that I think demonstrate the value of these base layers. Firstly, I didn’t use any of my spare clothing that I brought on the trip other than my shorts. I had two T-shirts with me that I simply didn’t need to bring. Secondly, after 10 days of use, wearing the base layers all day and all night, they really didn’t smell. The gear has been designed with odour in mind and uses technology to stay fresh for extended periods of time. We did wash some gear half way through, but this was more down to the opportunity of a washing machine than real necessity. 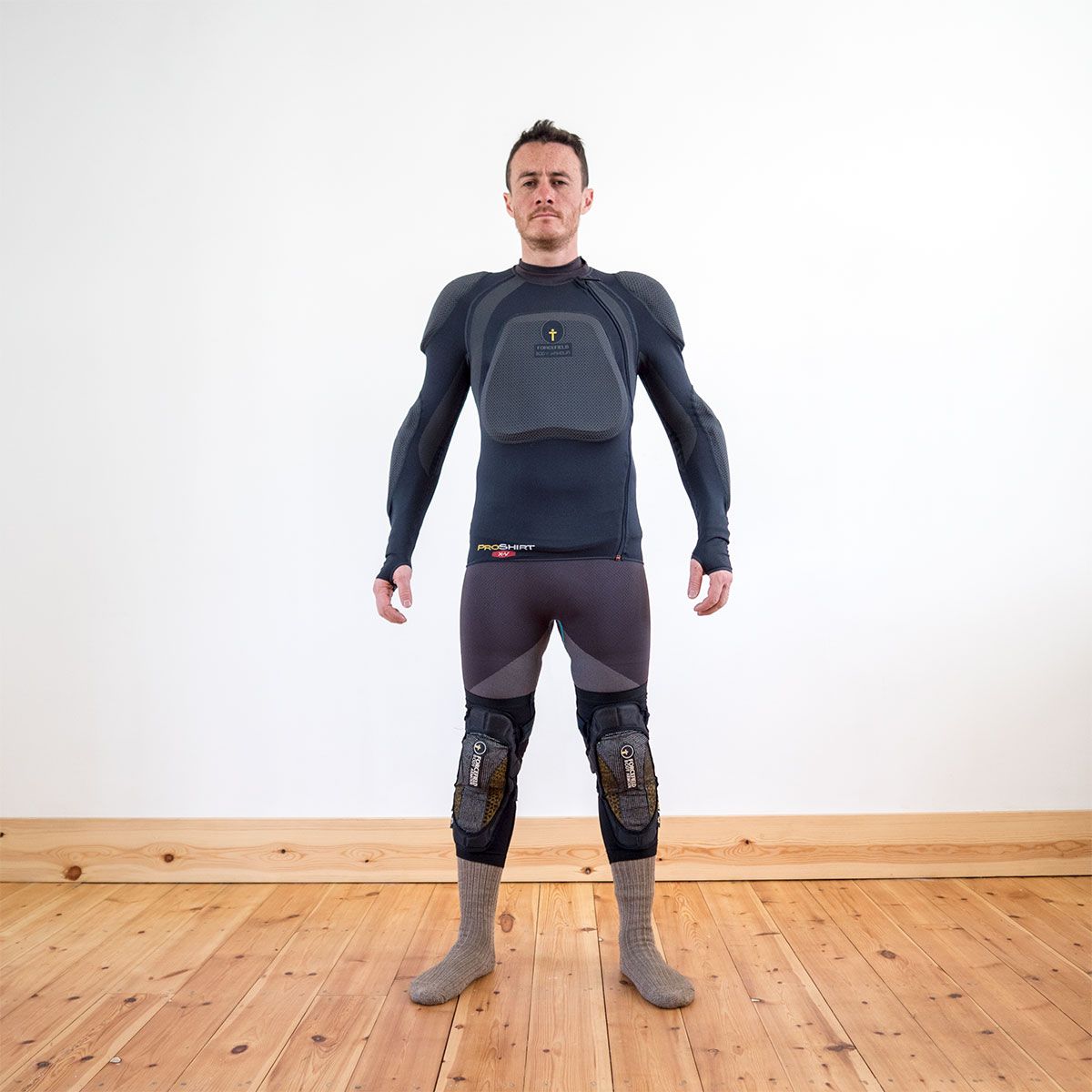 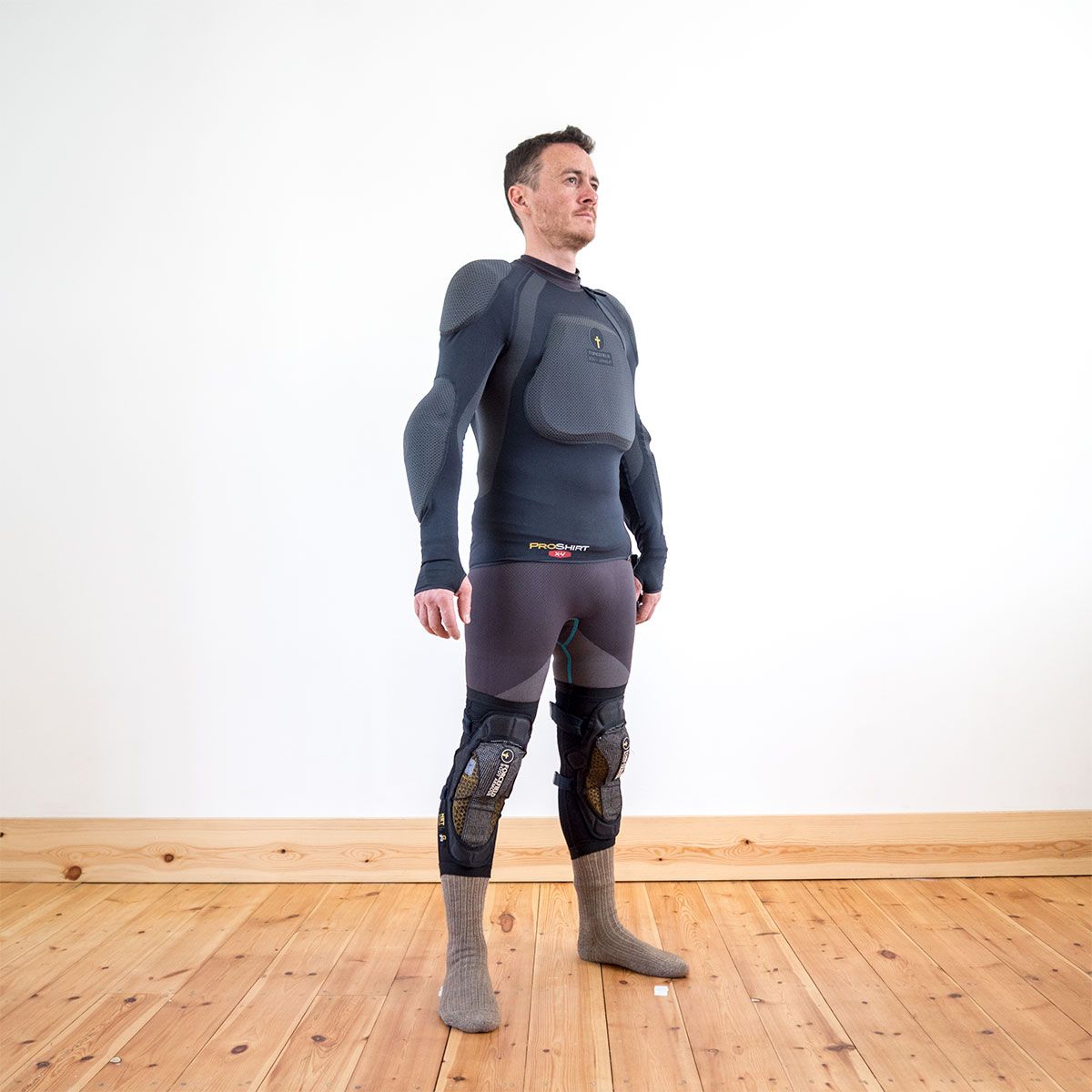 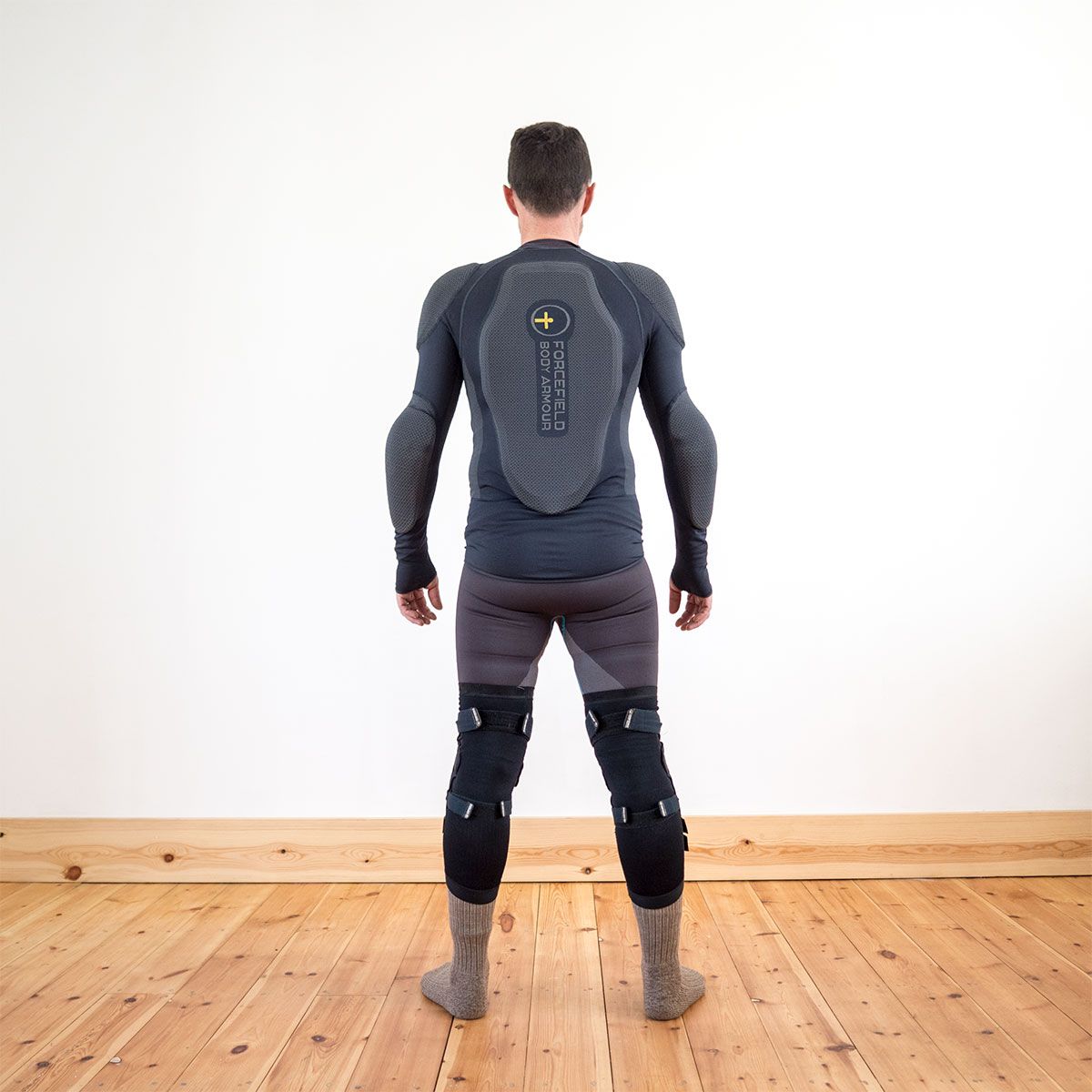 I’ve used the Forcefield Grid Knee Protectors for about 3 years now. Previously I had more robust hard plastic pivoted knee guards. I moved to these to reflect the fact that I was trail riding and not racing / rallying. Knee protection is a very personal choice, some people are very cautious about knee injuries and go to extremes to reduce injury which is totally understandable. It’s about calculated risk really.

For this TET trip, and the majority of my trail riding, I find the Forcefield Grid Knee Protector a good balance between protection and weight/bulk. They are light and unobtrusive (I think they may have been developed for mountain bikes) and offer some protection to the knee and shin area. I take a lot of photos that involve kneeling down so it’s good to have something that protects but doesn’t restrict movement off the bike. They don’t prevent any rotational injury but that’s a compromise that I am personally happy to take.

The Forcefield Pro Shirt is like a base layer with armoured inserts in the back, chest, shoulders and elbows. It’s comfortable and light, though I find that I do get hot when the temperature rises and I stop riding.

I used it over my ADV Spec base layers on this TET, and underneath my Baltic Hybrid and Lineman. I was comfortable and I didn’t feel that my movement was restricted at all.

The only point to make really is that when we stopped for lunch in a cafe etc, it was an extra layer to remove unless you are happy sitting eating your Belgian frites looking like a cartoon muscle man. I’m too self conscious for that.

Noel took a different approach and rather than using an armoured base layer he inserted his armour directly into his Linesman Jacket. 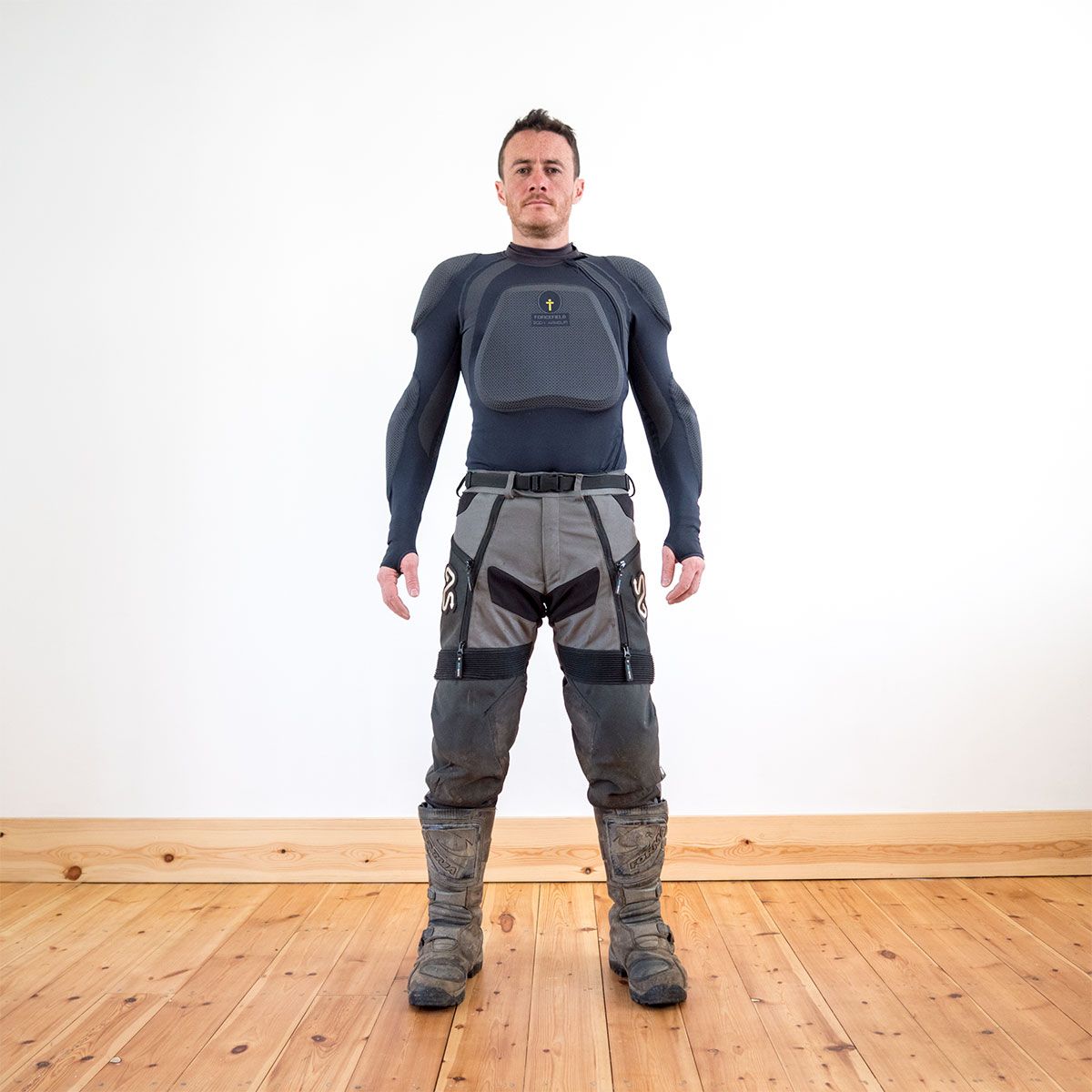 Like the Linesman Jacket, they are not waterproof so required an extra waterproof layer when the heavens opened in Netherlands. When it wasn’t raining the pants worked very well and the ventilation and breathability was noticeable. The crotch area uses elasticated fabric that aids movement and comfort and was noticeably ventilated. When we reached the Peak District in the UK and the sun was blazing I was grateful for the extra long zippered vents on the front.

Another point to note is the weight, these are light trousers. They make use of lightweight heat proof material inside the knees rather than the traditional leather which helps to keep the weight down and extends life when washed regularly.

As with all in the boot pants my boots did collect the odd bit of water from deep puddle splashes, but not to the point of discomfort. When the rain really came down I opted for a waterproof layer, and Noel who also used the Atacama Pants used his waterproof layer for wind protection on the extended road sections.

I’m a size 30 and I found the fit to be relaxed around the bum so kept the belt cinched fairly tight. 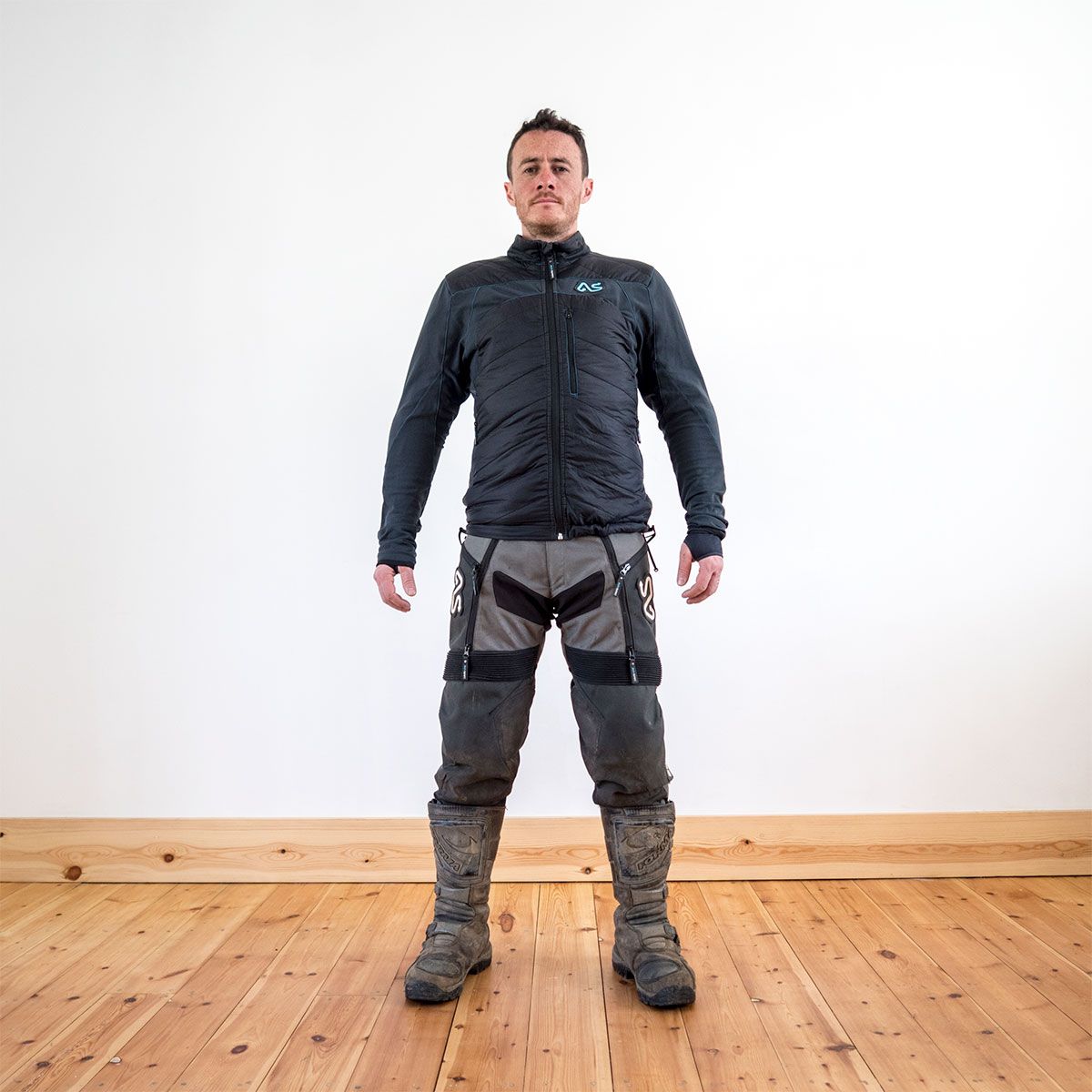 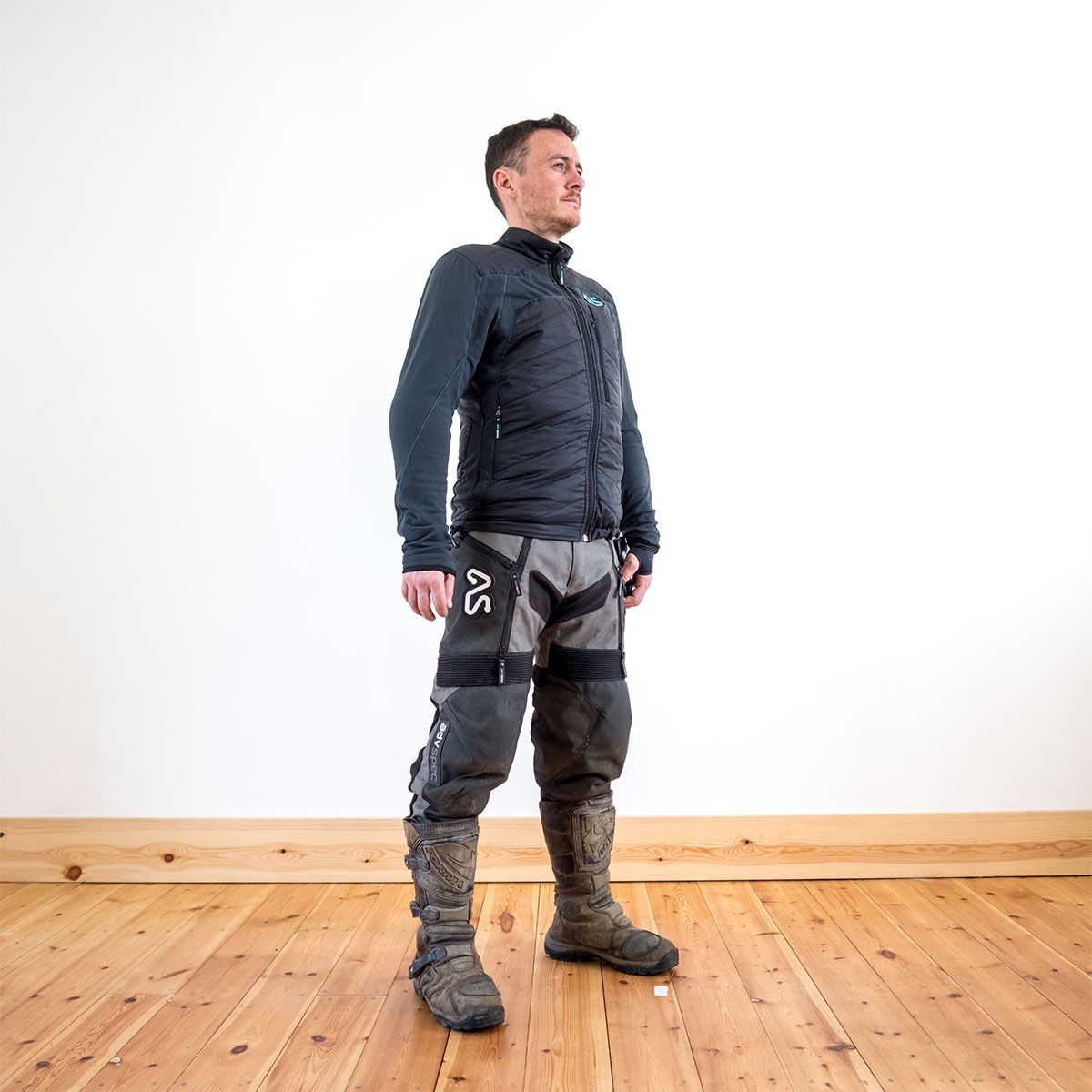 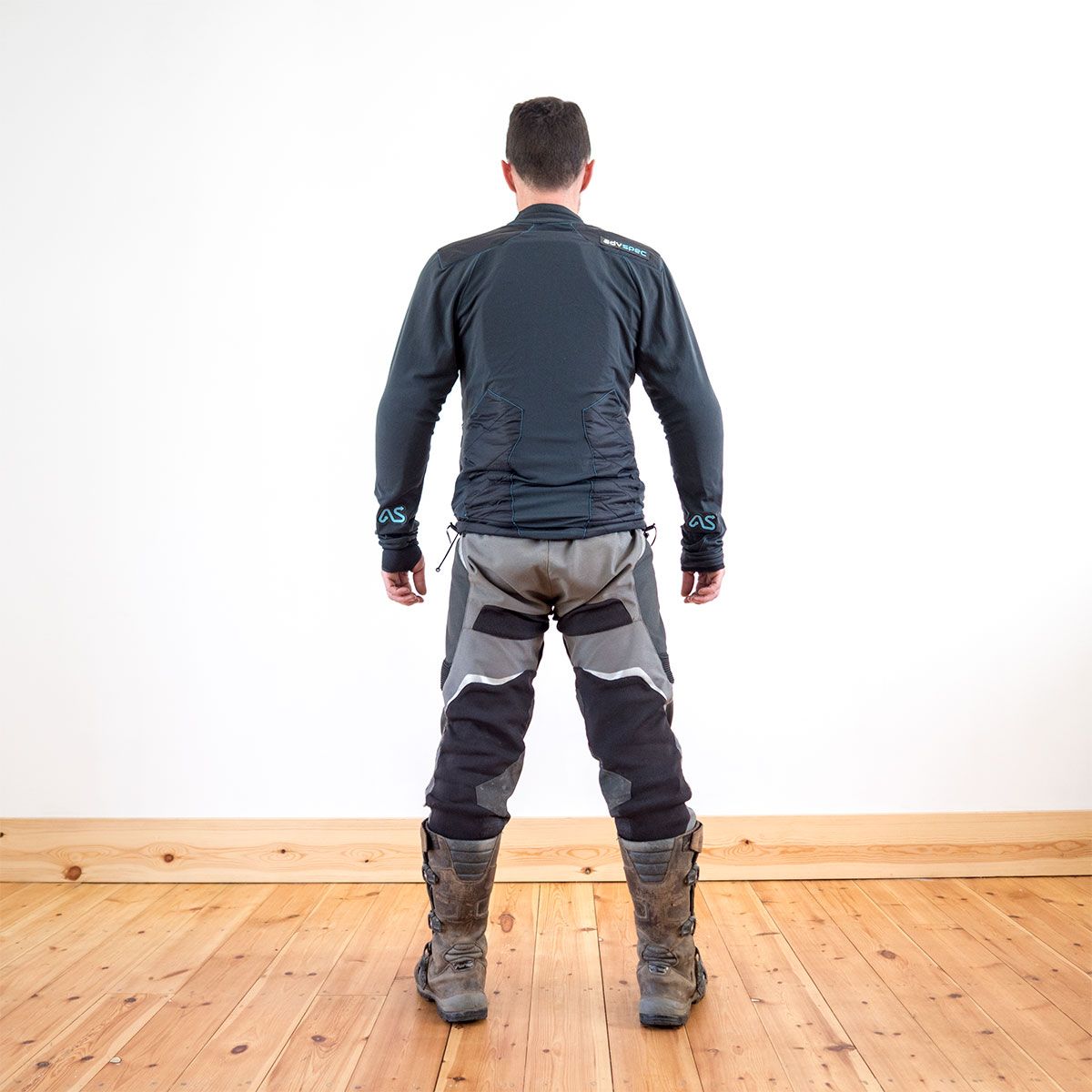 This has become my ‘go to’, ‘do everything’ jacket. It was worn on all but the hottest of days whilst riding, and stayed on in the evenings/night/morning during camp. I like the fact that it’s very lightweight and non-bulky especially when worn over body armour.

The chest pocket is a perfect fit for a passport which meant that I could keep this on me pretty much all the time.

When I got home from the trip it was the first bit of kit I put in the wash and the first thing I put back on after it was dry. In fact I’m wearing it now in the office as I put this article together, along with a T and jeans. In terms of value for money, I think this jacket will see the most use year round on and off the bike out of all the ADV Spec gear. 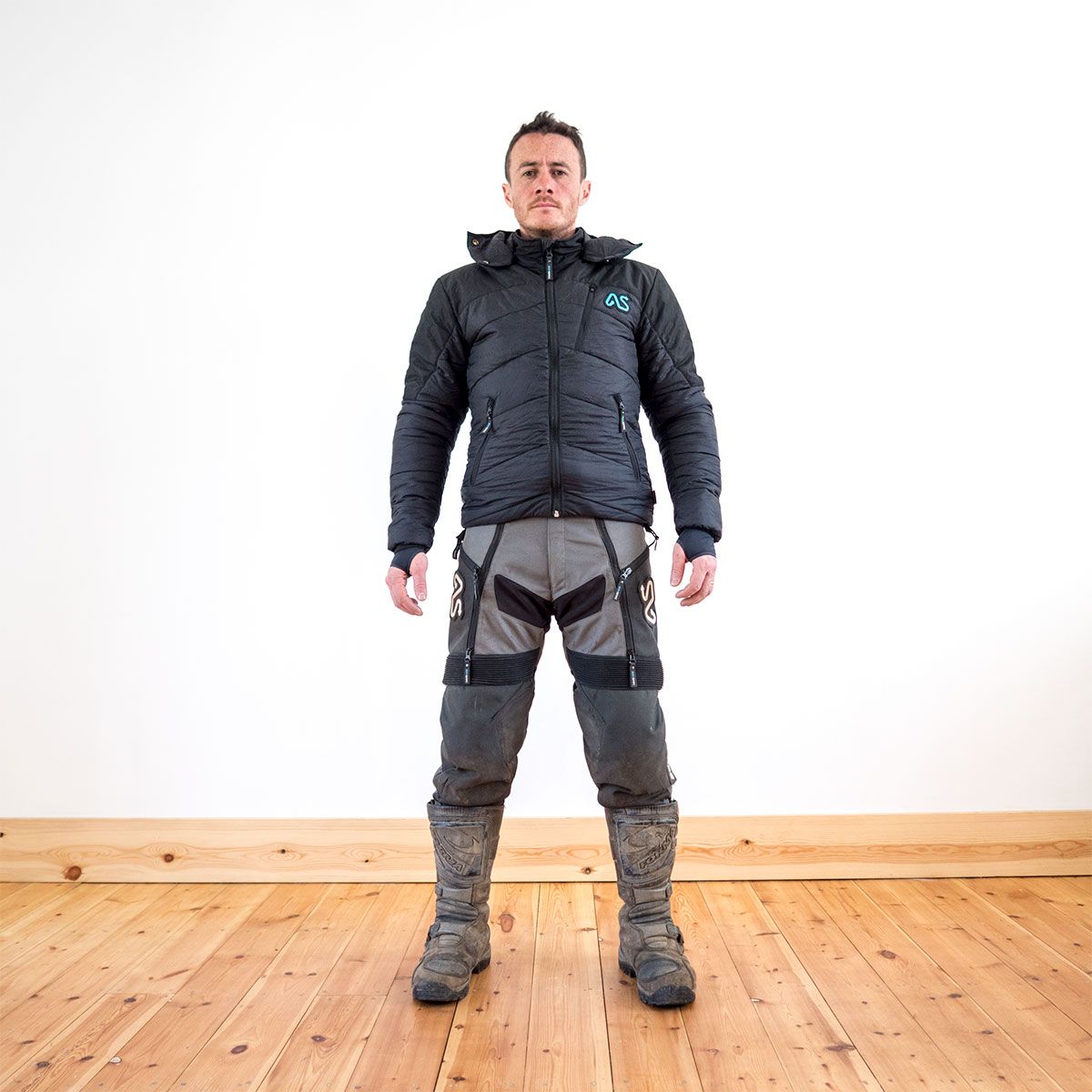 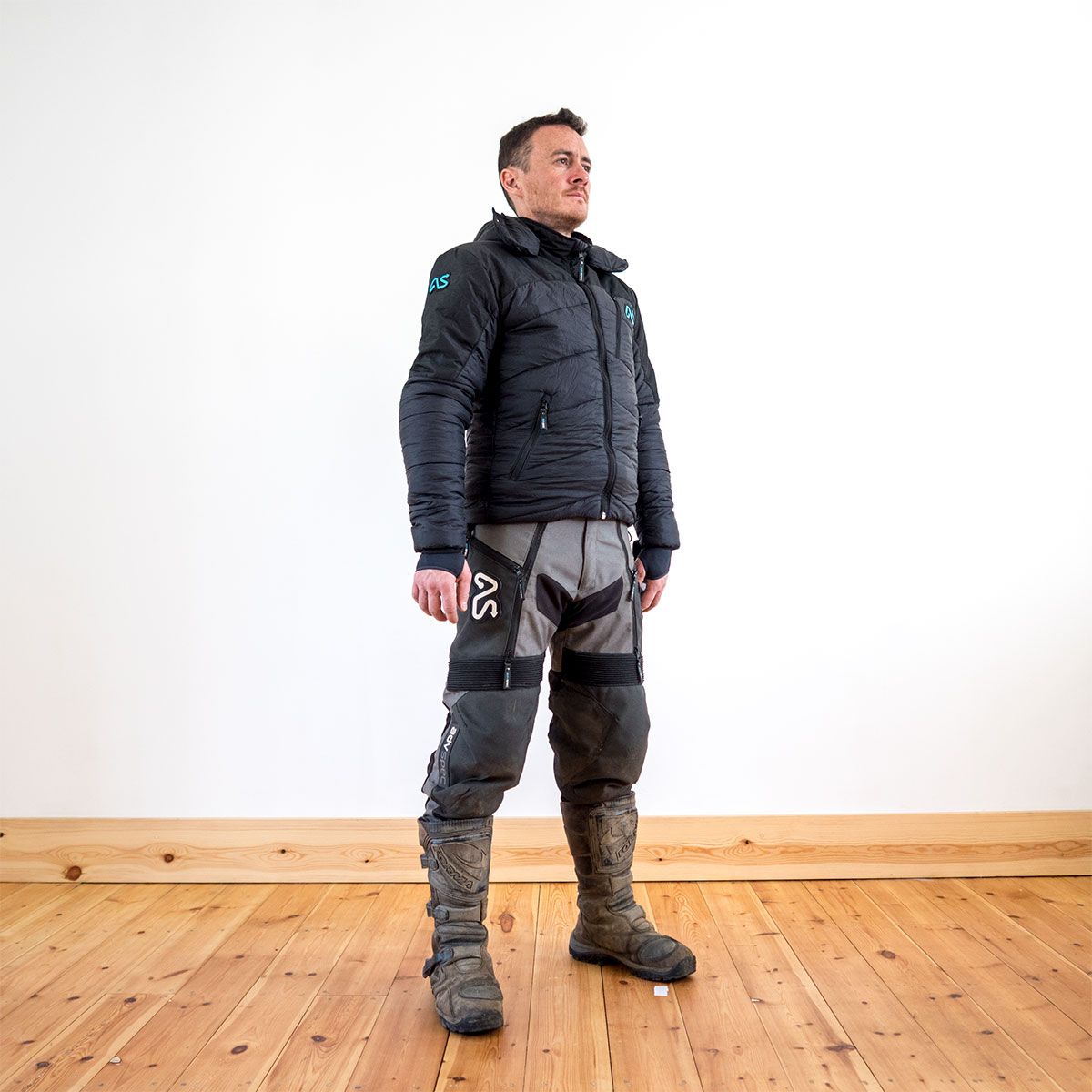 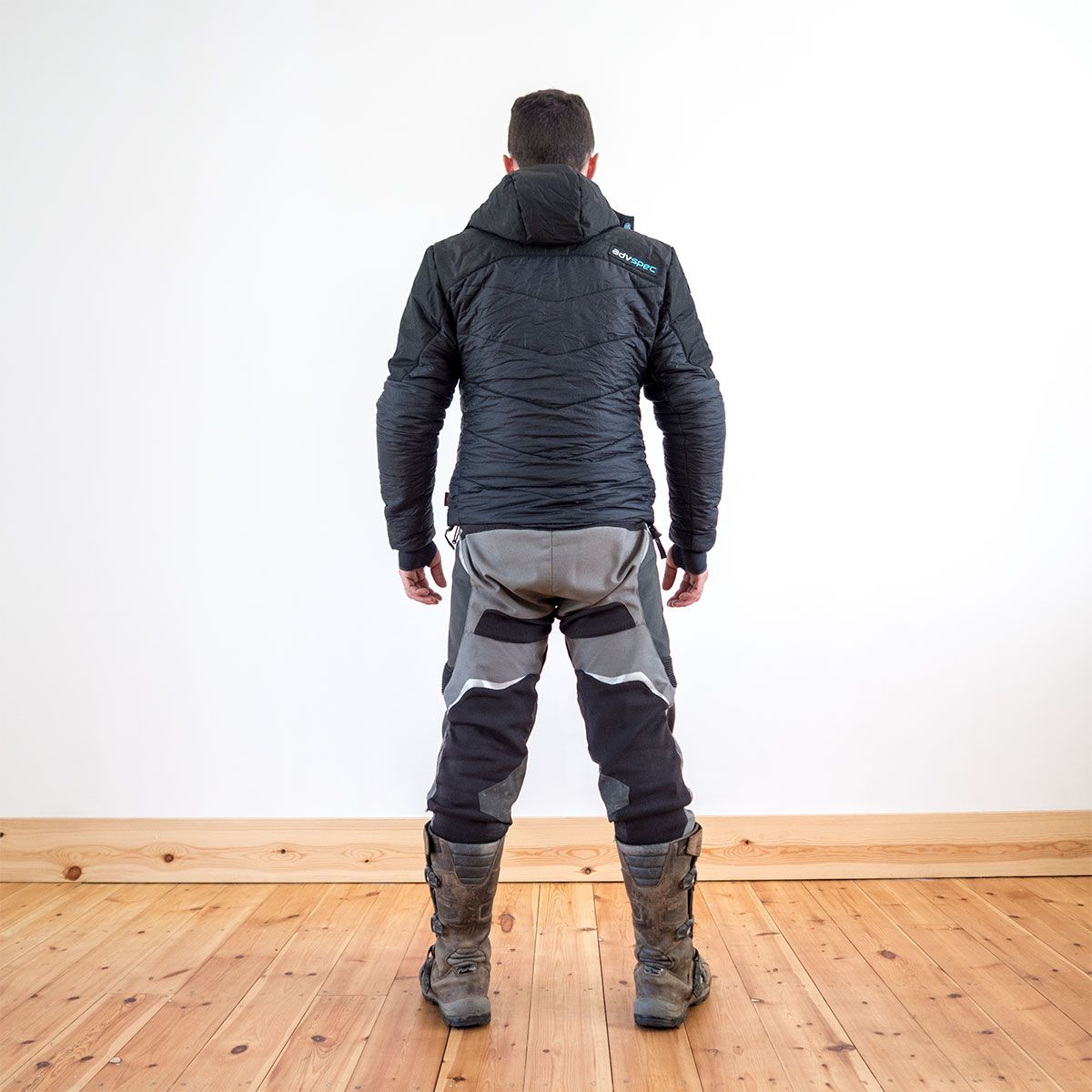 If I’d done this trip in the height of summer I’m not sure that the insulated jacket would have come with me unless I was heading for altitude. As it turns out, we had plenty of cold nights in Netherlands and Belgium and the Baltic Insulated was just the job for the campsite.

It stuffs into it’s own internal pocket so it packs pretty small, and is a fairly robust bit of kit. I use mine as a pillow and on more than one occasion I ended up putting it on inside my sleeping bag in the middle of the night as the temperature dropped.

In the mornings it was the first bit of gear to be put on whilst having coffee and packing up, and the last thing to be stuffed into the panniers before heading off.

The hood is removable so you can use it under your outer layer whilst riding. I didn’t actually find the need to do this however Davy did put it on under his Klim Traverse gear on one particularly cold night looking for a campsite in the Peak District. 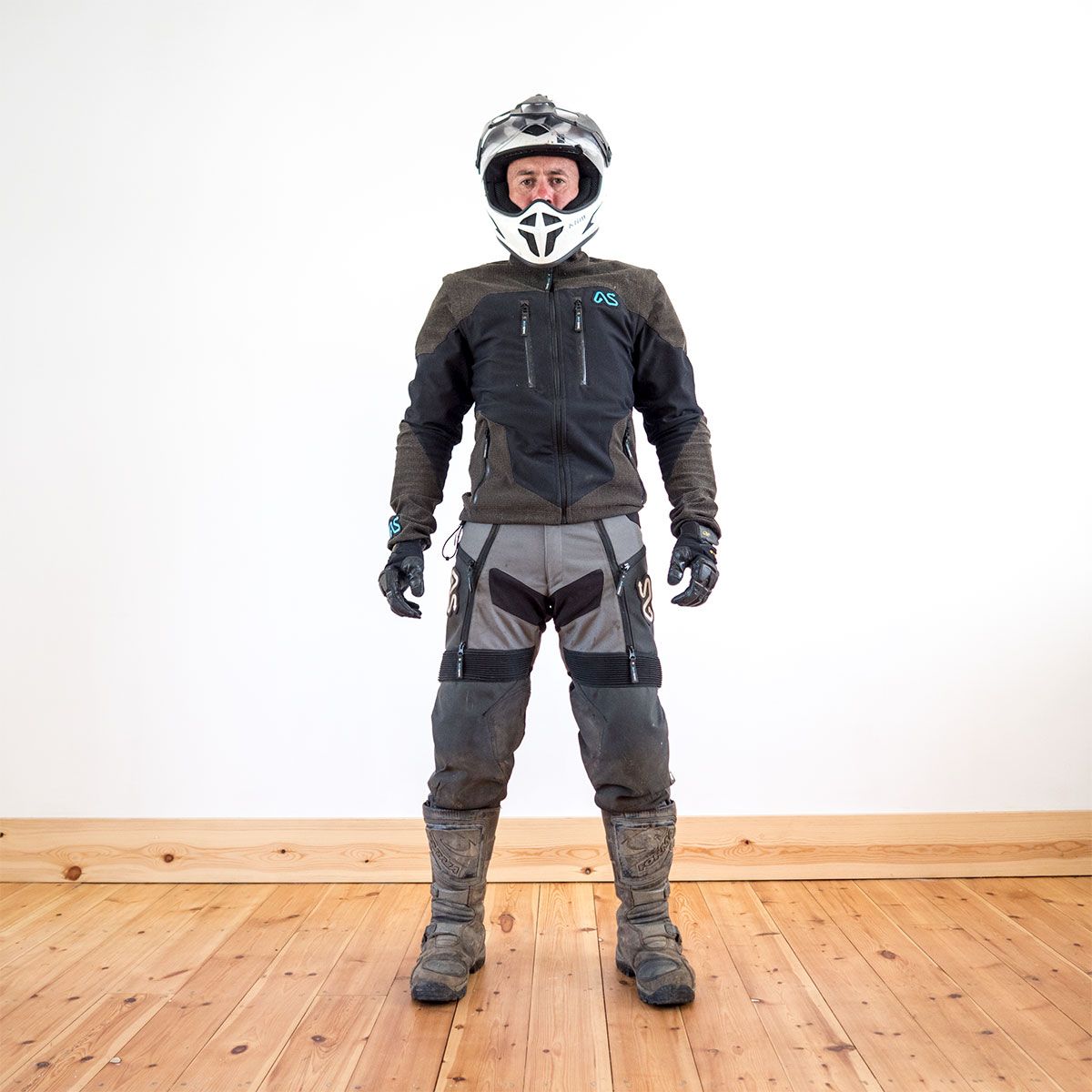 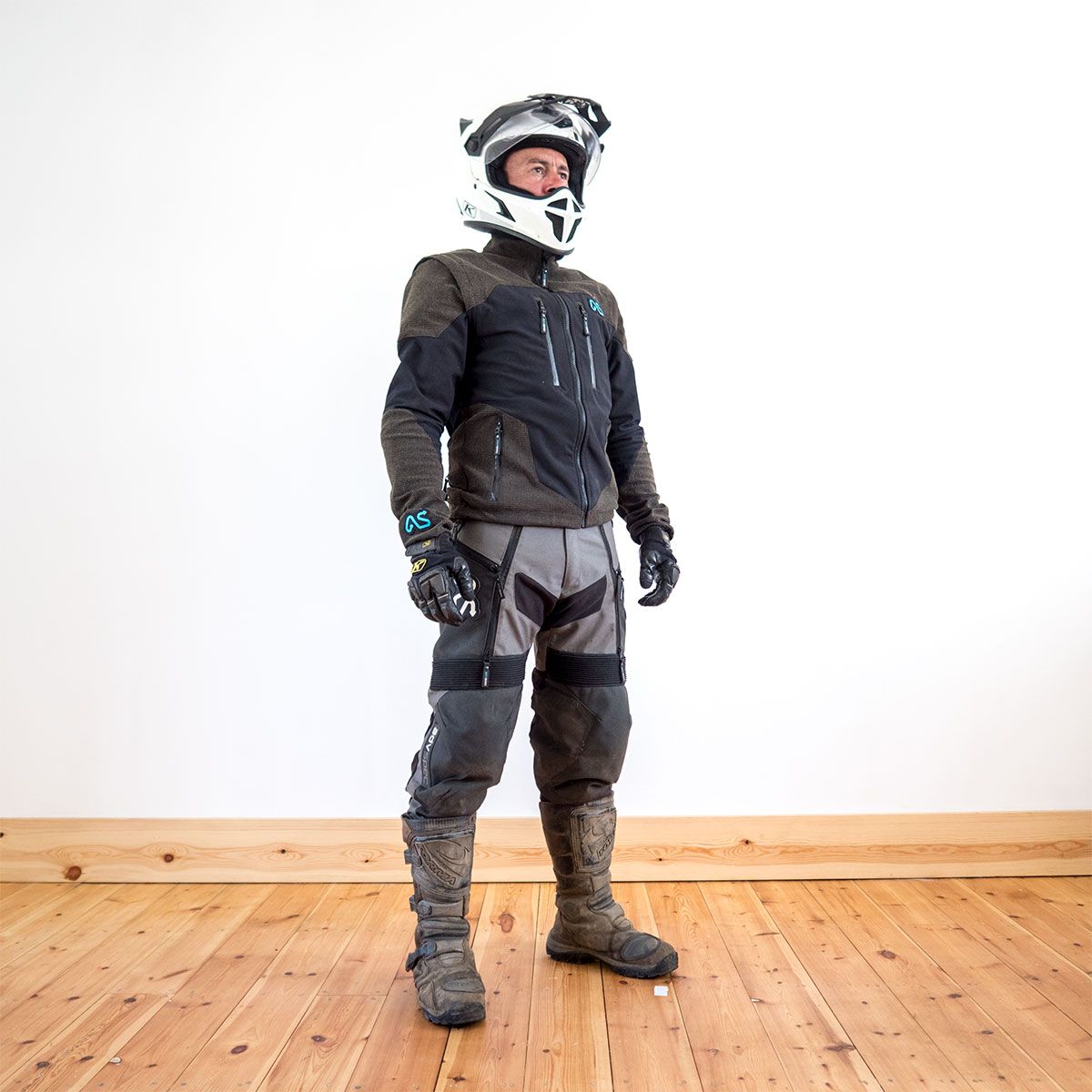 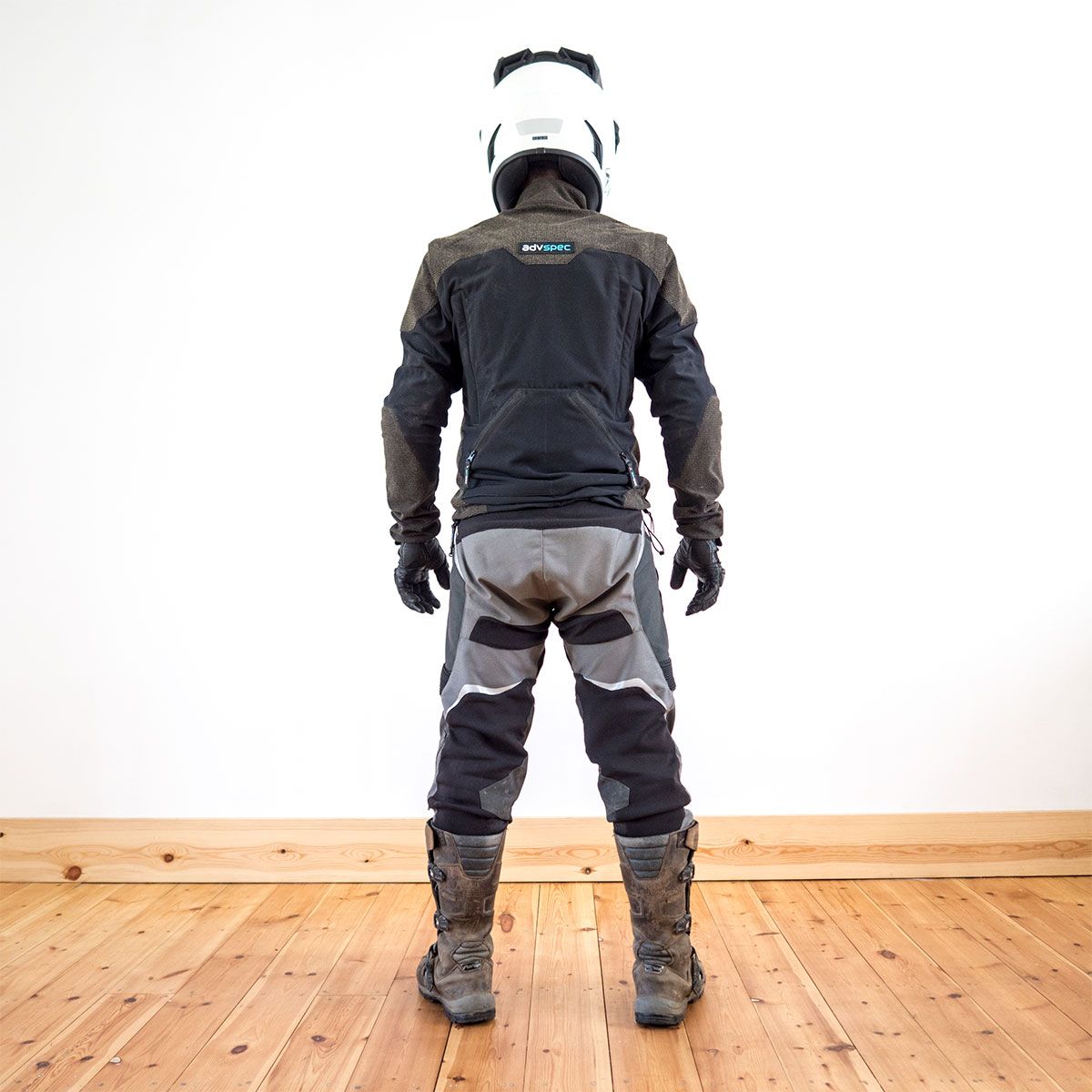 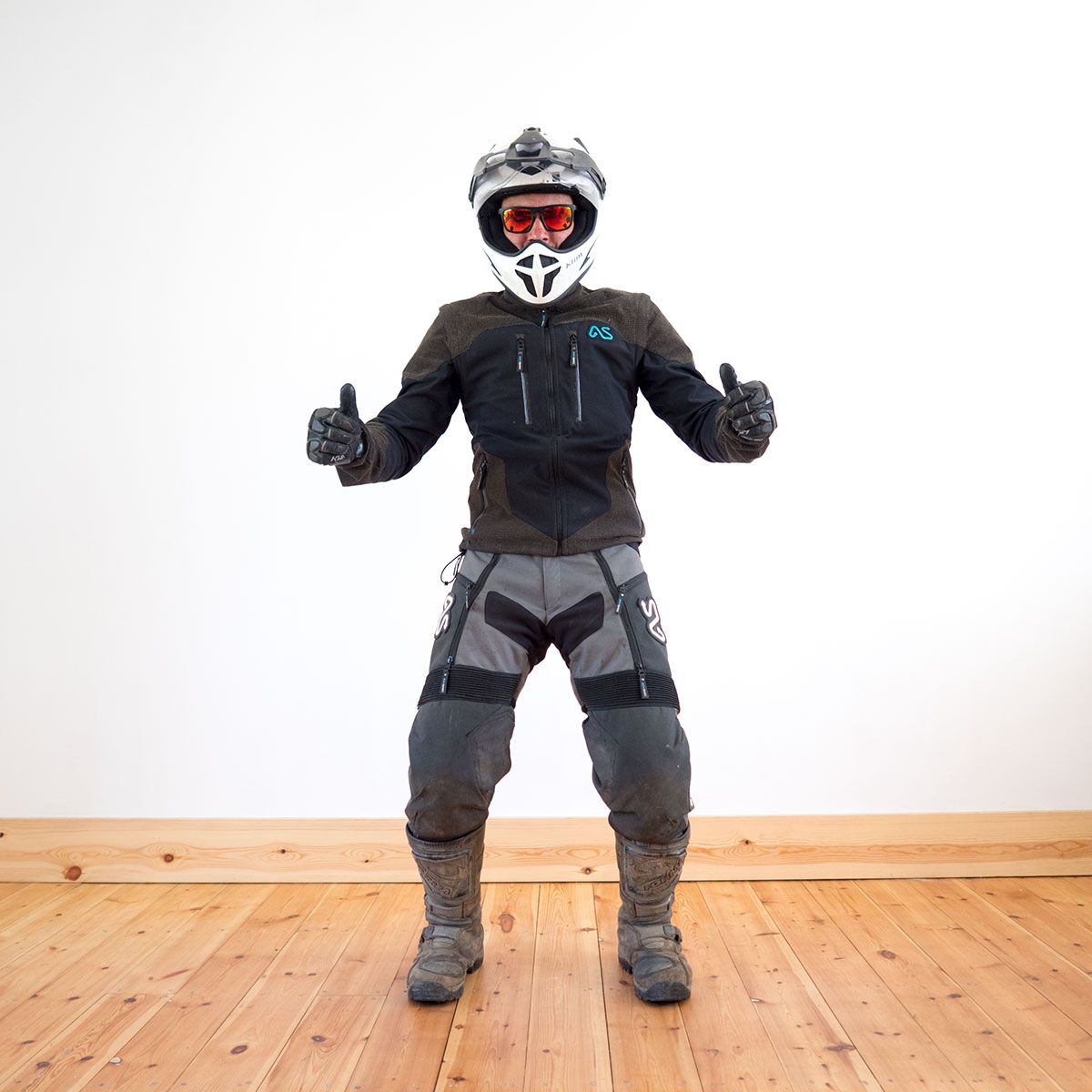 I love the idea that we rode the TET using the Linesman Jacket, which was named after the Linesmen that have helped put the project together. It’s a simple soft-shell jacket with Kevlar reinforced material in the key abrasion zones.

I think the first thing to mention is that it just looks really, really smart. It just doesn’t look like any riding jacket out there. It almost looks like a tailored jacket, I think due to the shoulders and the appearance of the kevlar weave which almost resembles tweed. Having come from the bright colours of rally / enduro gear, or the spaceman look of waterproof shells, it’s totally unique and I like it for that. When you are off the bike you really don’t feel like you look like a ‘biker’. It’s more toned down and sympathetic, I felt that I blended in more in the cafes and villages that we spent time in on the TET.

In terms of function, it’s very comfortable. It feels light and it’s quiet. This is largely down to the fact that it’s not waterproof, which is a double edged sword really. When it wasn’t raining it was far more comfortable than my Klim Traverse gear that I have worn in the past. You definitely want your base and mid layers to help keep the wind out for the road sections, but when it gets hot, or you’re doing technical stuff, or you are at the campsite then I really enjoyed wearing it.

The downside, and this is inevitable with a system like this, is the other side of the sword - it’s not waterproof. This meant that at the start of the trip during the Netherlands, when it started raining we had to stop riding whilst I and others with Linemen jackets put on their waterproof layers. It slowed the pace a little and I was conscious of the guys in their Klim Travers gear that didn’t need to stop but no one complained. This also meant that at the start of the day there was a certain amount of sky watching and checking iPhone apps to double guess the weather.

Other points to mention are the collar and sleeves. The collar is quite high and does a good job of blocking out wind on the road sections, the zip was easy to pull up one handed whilst riding. The sleeves are purposefully over length and don’t have velcro fastenings. This means there’s a little bunching at your wrists which is comfortable and means that you don’t get sunburnt patches when your arms are outstretched.